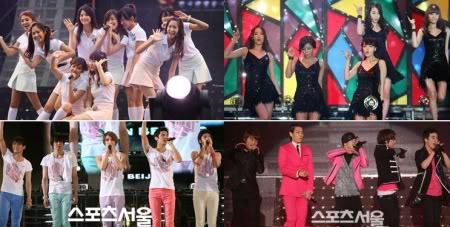 Some of Kpop scene’s biggest names like Dong Bang Shin Ki, Big Bang, So Nyeo Shi Dae, WonderGirls will be coming together to perform on one stage.

Dream Concert is a yearly tradition which started in 1995, and is a glamorous stage featuring Kpop’s biggest acts.

And for this year, though not all the details are confirmed, it is said that there are high chances that artistes like Dong Bang Shin Ki, Big Bang, Super Junior and 2PM for male singers and So Nyeo Shi Dae and WonderGirls for female singers will be performing for the concert.

Especially for WonderGirls who have been recently performing on Jonas Brothers’ concert tour will want to make use of this stage to meet up with their Korean fans whom they have been missing out for a while.

Even thought we see the music festivals that Korea’s 3 biggest broadcast companies will hold every year end, it will be hard to see all the biggest Kpop names together on one stage since they are busy with their overseas activities and promotions.

And the aim for ‘2009 Dream Concert’ will be to bring all these biggest stars together on one stage. Also previously in May, KMP (Korea Music Power) project has taken place with the participation of SM, JYP and YG Entertainment to “make Dream Concert the best performing stage” supporting their artistes’ participation for this concert.

Currently each of the artistes’ companies have said, “There is still so much time left to the concert itself. We are currently talking to the sponsors before confirming if they are really going to perform for the concert.” they will be carefully monitoring the response to the concert.

While on Dream Concert’s side, “Even we have not confirm who will be performing, we want to make this one of the biggest performing concert in history and be proud of it.”